From 2007 to 2013, the GAL Cévennes had chosen as priority goal the confrontation and the development of sustainable rural economy, highlighting as a priority local resources.

Today’s GAL Cévennes’ ambition lies in the following up of the work committed to the development of sustainable economy for the territory by a coherent group of necessarily transversal actions, to enable the supporting of today’s demographic dynamics with a revitalization of the local social-economical fabric (current or to come) and with the reinvestment of the territory (in opposition with a definite human underestimation)

This strategy aims at offering the population an attractive living environment, to help them settle on the territory, by galvanizing local economy and removing obstacles to attractiveness.

This strategy mainly consists of resting on the local or micro-local resources and richness (know-how, resources and productions: sweet onions, chestnuts, forestry, agriculture, arts and crafts, …) to support the development of the economy within the heart of this territory that generates new resources for the populations.

When setting up this program, the GAL Cévennes will favour an environmental friendly rural development through eco-condition criteria (eco-construction, energy savings, eco-citizenship…) thus, to preserve the richness of the territory, the biodiversity of the Cevennes landscape and the quality of life for the inhabitants. It will also ensure the territory settles into modernity by supporting innovating initiatives whether it be in the method or the process, the exemplary nature or experimental production and marketing modes, the use of new technologies…..

But the GAL is also a link to multiple European funds…

Project carriers will be guided by the GAL team towards these funds according to possibilities given by the Operationnal Program FEDER-FSE-IEJ and by the  Regional development Program (FEADER) of the Languedoc Roussillon. 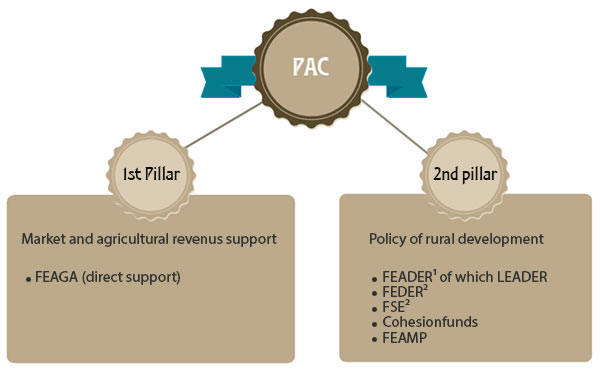 1  FEADER can be mobilized beyond the LEADER program, the thematic close to those addressed by the LEADER program are part of a share zone. The LEADER in Cévennes program wishes to support collective animation initiatives highlighting productions, land structure, forestry structuration…, with the possibility of FEADER financings resulting from these actions (investing in machineries for agricultural and forestry productions, accompanying those candidates to agricultural installations, care homes…).